Preventing, Detecting and Responding with a One Health Approach

Zoonotic infections, transmitted between humans and animals, are increasing through-out the world. Within their own sector, re-searchers and practitioners from different fields have a considerable understanding of outbreaks of disease and how to handle them. They also know they must bear in mind how local factors, traditions and politics can de-termine the outcome. But a disease outbreak causing deaths and disruption is always a complex picture. It requires all actors to gather knowledge from beyond their own field of expertise in order to be fully able to address disease outbreaks efficiently. 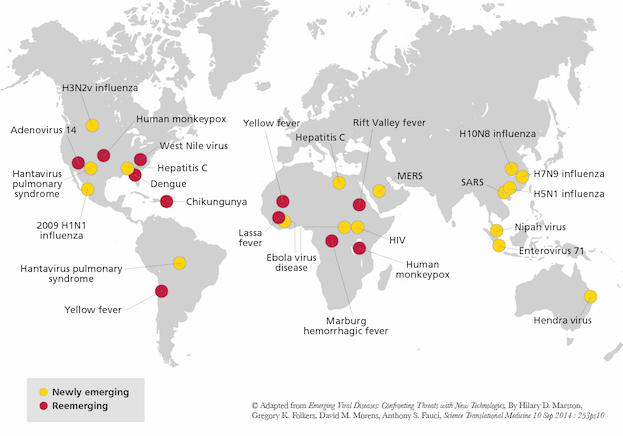 Professor Hans Rosling at Gapminder has illustrated how global trends in health and eco-nomics have improved during the last century. Life expectancy in China rose from 32 years to 71 between the years 1900 and 2000. In India it rose from 18 to 61 years. Nevertheless, constant vigilance is necessary: transboundary infectious diseases, of which many are zoonotic, are a per-sistent, major threat to global health.

The increased mobility of people, intensified animal production and climate change, along with the strains put on vulnerable ecosystems around the world, have all provided new possibilities for infectious diseases to strike and become global threats. Our ability to transport people and commodities from one corner of the world to another within a day gives pathogens with an incubation period of 48 hours (the time from being infected to the first signs of disease) a good chance to reach new continents undetect-ed. Climate change has extended the potential habitat for vectors like ticks or mosquitos and slowly but surely they will move a disease into new territories.

Two modern zoonotic outbreaks that made the world take notice

Many zoonotic pathogens have animals as pri-mary hosts. These serve as vectors: bearers of the disease to humans. Vector-borne diseases are carried by birds, mosquitos or mammals. Although infections affecting both man and animals have been known about for centuries, in 1996 the whole world became very aware of them due to the seriousness of “mad cow disease” (BSE, Bovine Spongiform Encephalop-athy). It became evident that the prion protein from BSE-infected cattle caused a new variant of the always-fatal Creutzfeldt Jacobs disease in young adults (2).

In 2003–2006, an outbreak of avian influenza, H5N1, also alerted the world to the zoonotic potential of recombination and re-assortment of the influenza virus and the importance of world-wide surveillance and early detection. It prompt-ed a close collaboration between WHO, FAO and OIE as well as the medical and veterinary professions on country level (3, 4). The human cases of H5N1 had all been in close contact with infected or dead poultry. Although the death toll was comparatively low, it brought back chilling memories of the Spanish flu in 1918. Referred to as “The Mother of all Pandemics”, the Spanish flu killed approximately 50 million people in Europe and 100 million worldwide (5).

Zoonotic threats continue to be a major global health problem

One of the zoonotic infections with the potential to remain a modern problem worldwide is tuber-culosis. The host range is wide including both humans and wild and domestic animals. The bo-vine type (Mycobacterium bovis), as well as the human type (Mycobacterium tuberculosis), can infect humans and animals irrespective of type (6). Tuberculosis is highly contagious and around a third of the world’s population are carriers of the bacteria although only one in ten will come down with the disease. Tuberculosis kills around 1.5 million people worldwide every year, second only to malaria. The infection is spread mainly by airborne droplets (6, 7) but unpasteurized cow milk can be a significant means of transmission in countries where the disease is endemic.

Vector-borne diseases are estimated to cause more than a million deaths per year but many more individuals are infected and chronically debilitated for the rest of their lives. The global incidence of mosquito-borne dengue has grown dramatically in recent decades. About half of the world’s population is at present estimated to be at risk (8).

The global tally of malaria in 2015 was 212 million new cases and 429 000 deaths. Across Africa, millions of people still lack access to the tools they need to prevent and treat the disease. Funding shortfalls and fragile health systems restrict access to life-saving interventions and jeopardize the attainment of global targets. Ac-cording to the report, fewer than half of the 91 malaria-affected countries and territories are on track to achieve the 2020 milestone of a 40 % reduction in case incidence and mortality (9).

Another important vector of often deathly virus-es for man is bats, as evidenced by the Ebola out-break in West Africa in 2013–2015 which caused the death of 11 000 of the infected 28 000 per-sons. Analysis of the outbreak in Sierra Leone shows that in time of crisis, it is necessary for different actors, local and international, to join forces, and have preparedness and structure for response before the outbreak occurs (10).

Responses will be effective only when there is shared knowledge

Rapid detection of the serious infectious diseases listed above, and others, in any country is of vital importance to limit the spread and to re-strict the number of infected and dead.  Zoonotic diseases can have serious consequences for both health systems and food production, jeopard-ising the livelihood of whole regions. By using modern surveillance systems for both endemic and emerging diseases, a rapid response can be achieved. The taking of further measures in an acute crisis needs to be based on science and good practice and furthermore the use of financial resources in an efficient way. But if there is poor communication and a lack of agreement between the actors involved, this can spark off disagreements leading to panic and despair among the public. Therefore, responses to outbreaks of emerging diseases can only be successful if all involved parties, from politicians to local organizations, know more about each other’s area of expertise and have a prior understanding of the benefits of a contingency plan and associated agreements and guidelines. It is of vital importance not only to do the right things, but also to do them in the right order. This may sound simple, but is a daunting task in a crisis situation.

What is One Health?

One Health is a holistic approach that recogniz-es the connection between the health of humans and the health of animals and the environment. The name may be new but it is a way of thinking that dates back to the Greek physician, Hip-pocrates, who recognized the importance of a clean environment for public health. The goal of One Health is to encourage a collaborative, multi-disciplinary approach, working on a local, national, and global level, to achieve the best health for people, animals and our environment. As approximately 7 out of every 10 emerging infectious diseases in humans are spread from animals, a One Health approach is more impor-tant than ever (11).
One Health is today more of an approach than a new concept. And it is rapidly becoming an international movement based on cross-sectorial collaborations (12).
But for One Health to be more than just a name, it is up to the different disciplines to work to-gether and communicate their knowledge to the relevant politicians to provide a solid foundation. Since one size doesn’t fit all, global differences have to be taken into consideration. But for a successful approach to acute crises like a ma-jor disease outbreak, there are always certain measures that have to be taken, and, with that in mind, a commonly agreed upon and used “best practice protocol” could be of great value.

Which problems hinder the application of a One Health Approach?

The tripartite collaboration agreed between WHO, OIE and FAO has this vision: “A world capable of preventing, detecting, containing, eliminating, and responding to animal and public health risks attributable to zoonoses and animal diseases with an impact on food security through multi-sectoral cooperation and strong partnerships.” (13)

While frameworks have been established at in-ternational level, policy implementation at the country level remains difficult. There are, for example, many countries with poor communi-cation between human and animal health sur-veillance, and little understanding of the mecha-nisms and circumstances that lead to the spread of pathogens between animals and human beings in the first place. When it comes to co- ordinating a response, it is often not sufficiently understood that measures are urgently needed to halt the spread of disease in the animal hosts as well as in humans.

What is needed to unlock these implementation challenges?

We need to work across boundaries and towards modified academic and government structures which enhance collaboration. A greater aware-ness is needed of where expertise can be found covering the different aspects that have to be taken into consideration for an efficient disease prevention, control and outbreak response.

We must build robust systems that can support sound decision-making based on science, and avoid being side-tracked by rumours and unsci-entific agenda-setting.

Why we are talking about this at Uppsala Health Summit?

Via lessons learned from recent disease threats and a better understanding of international set-tings, we have a unique opportunity at Uppsala Health Summit to widen perspectives and agree on what is essential for an optimum response to an outbreak.

It would be heartening to see the development of a common understanding as to how different disciplines could join forces and to have a com-mon basic agenda for how to deal with conta-gious diseases worldwide. A kind of toolbox giv-ing priorities as to what needs to be done first for a successful outcome. To not only do the right things, but also to do them in the right order.