No single magic bullet: Shaping Behaviour through a Systems-Approach 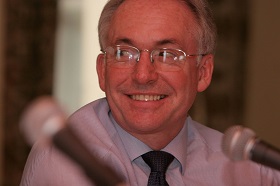 During the past 20 years there has been a dramatic increase in the societal interest in the powers of changing behavior to prevent death and disability from chronic disease. Different methods are promoted including how people can be nudged into changing, and the market is overflowing with apps that will help regulate almost every unhealthy human behavior. But according to Professor Mike Kelly, Senior Visiting Fellow, Department of Public Health and Primary Care, University of Cambridge, methods like this are often inefficient, unless they form a part of a broader armory, involving complex human interactions.

̶  There is no such thing as a single magic bullet. It has to be a concerted effort from top to bottom. To prevent cancer and other chronic diseases, we have to think about the broader canvas; a system-wide approach to changing behavior.

According to Professor Kelly, the example that illustrates this better than anything else is tobacco.

̶  60 years ago, cigarette smoke was everywhere in the western world. Today, smoking in the UK is down to less than 20 % of the adult population. The success of tobacco control can be attributed to a multi-layered, multi-pronged approach that involved everyone, from government down to  individuals…it made use of extensive evidence available about a range of things, including the economics of tobacco production and tobacco taxation, through to the psychology of addiction and the understanding how peer group pressure operated. This approach has proven to be a powerful tool compared to what we see with obesity or alcohol consumption, where control policies are still pretty much in the dark ages.

Professor Kelly has devoted his career to understanding the social determinants that influence health outcomes and developing approaches to influencing behaviors. From 2005 to 2014, he was Director of the Centre for Public Health at the National Institute for Health and Care Excellence (NICE). From there he was responsible for the production of more than 60 guidelines on topics including the prevention of obesity, alcohol misuse, cardiovascular disease, smoking cessation, tobacco control, and the promotion of physical activity.

̶  There are several elements which remains puzzles from a research point of view. One important one is the stubborn and ubiquitous nature of the inequalities that produce the wide disparities in health outcomes. Despite the best efforts of the government health authorities, the WHO and others to confront these differences, very little that has been done has led to changes in these inequalities. All societies have these health gradients, they vary in their steepness, but they are there none the less” Dr Kelly explains.

̶  All of this says that this is a terribly difficult and complex scientific arena, made more difficult by the fact that repeatedly, politicians and interest groups from around the world, have opted for simple solution to these complex problems, usually focusing on health related behavioral change, whereas in fact we need to devote much more research to understand the mechanisms behind why certain people are at greater risk of developing disease than others.

̶  It is my hope that in the near future, some of those gaps will be filled and we will see a more evidence based approach to behavior change”, Dr Kelly adds.

Professor Kelly will develop on these arguments in a plenary session on behavioral change at Uppsala Health Summit 2018, where he will discuss with Dr. Douglas Bettcher, responsible for coordinating WHO’s work for the Prevention of Noncommunicable Diseases and previously the Director of WHO’s Tobacco Free Initiative Department.

Dr Kelly will also give an inspirational talk in the workshop on how to move forward on the findings of the benefits of exercise during cancer treatment.

̶  What are your expectations for participating at Uppsala Health Summit?

̶  It´s always good to meet colleagues from outside your home territory who can challenge you and who perhaps see the world rather differently to you. I am as enslaved by my cognitive biases just as anybody else! So that is what I am looking forward to.