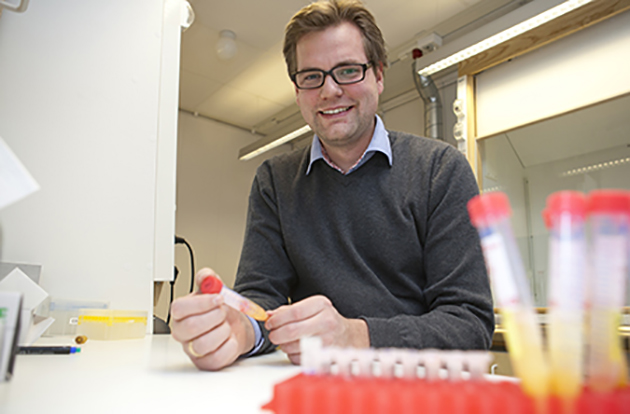 The program for Uppsala Health Summit 2016 is being fine-tuned, invitations are out and the conference venue at Uppsala Castle is booked. While more preparations are taking place, I take a moment to catch up with Dr. Rikard Landberg to talk about expectations and how his own research relates to this year´s conference theme.

“I look forward to concrete discussions that can provide useful insights and inspire us all as we go forward. I think that the way Uppsala Health Summit is set up provides the opportunity to create the type of debate we need”. Dr Landberg shares as we meet at the Biocenter of the main campus of the Swedish University of Agricultural Sciences (SLU) at Campus Ultuna.

It is the eve before Easter and like elsewhere in Sweden, Uppsala is settling into its candy-eating holiday mood, but the Biocenter is still bustling with student activity. It feels appropriate and comforting somehow to know that even on this day, there are researchers busily thinking about how to reduce the risks of our many inappropriate diets. ”So the role of diet for health, that´s the broad picture of my research. Specifically, I am concerned with the impacts of bioactive compounds and fiber-rich foods, such as whole grain, on our appetite, metabolic regulation, and how they influence risk of chronic lifestyle diseases”.

Dr. Landberg is a resident researcher at the Department of Food Science, but is also affiliated with the Nutritional Epidemiology Unit, Institute for Environmental Medicine at Karolinska Institutet in Stockholm and the Danish Cancer Society Research Center’s unit for diet, genes and environment, where he is guest researcher.

Central to Dr. Landbergs research is the development of dietary biomarkers, i.e.ways to trace dietary intake by a simple blood sample, instead of using self-reported methods which are common in nutritional studies. His team has developed a biomarker to trace how much whole grains we eat - which is now being used in large population based studies to better understand the role of fiber rich foods for human health. “Previously, we had to rely on food diaries and questionnaires, which creates a lot of noise and measurement bias in the data” Dr. Landberg explains.

Applying the biomarker in a large European prospective cohort study - the team was able to show that intake of whole-grain rye and wheat is associated with a reduced risk of colorectal cancer.

So what then about weight-control, I wonder, – is there a benefit in eating whole-grain products to lose weight and prevent all the other associated non-communicable diseases?

Dr. Landberg and his peers have been able to conclude that high-fibre rye influences appetite control. But since hunger alone does not regulate how much we eat, they are currently trying to understand the mechanisms behind the presumption that eating rye rather than wheat has a positive influence on weight-loss and decreased body-fat.

If this proves to be right, would promoting whole-grain be a silver-bullet in efforts to reduce obesity among children?

“Unfortunately it is not that easy… to a large extent it is a systemic issue, and different approaches will be necessary…we need to align policy priorities and get for example retailers

involved, and provide the incitements they need to invest in promoting different types of healthy foods”.  In the workshop, Dr. Landberg is organizing together with colleague Dr. Cecilia Mark-Herbert, there will be a focus on the need for innovations in food sector. "But diet is just a piece of the puzzle and other pieces will be addressed in other workshops. There are so many different layers to this issue”.

And according to Dr. Landberg, Uppsala Health Summit 2016 is a good place to continue the conversation and come up with concrete action points for different contexts. “I really look forward to hear about successful projects which can inspire future work, and I hope we will come up with some concrete proposals for action”.

It will be the second time Dr. Landberg participates. He was involved in the first conference 2014 where he helped organize a workshop on Diet and Healthy Aging.

“It doesn’t happen often that there are enough funds to create a forum like this, so for us researchers it is a real opportunity. I love working across sectors - that’s where the interesting initiatives can begin!"